Government of Khyber Pakhtunkhwa launched a Social Health Protection Scheme on Dec 15, 2015 with brand name “Sehat Sahulat Programme“ with the financial support from German Government through KfW Development Bank. Total Cost of the Scheme (for phase-I) was 1399.156 million (KFW share Rs. 1233. 256 and KP share Rs. 165.90 million).
Overall Goal of the programme is to improve the health status of the targeted population through increasing access to quality health services and to reduce poverty through reduction of out of pocket payments for health expenditures.
Iniaatially 100,000 households (21% poorest population) of Mardan, Malakand, Kohat and Chitral were targeted, where service provision started from February 1, 2016 (Chitral – July 1, 2016).  Keeping in view the role of Social Health Protection in reducing poverty as well as its role in the improvement of health status of the people, the Government of Khyber Pakhtunkhwa decided to extend the coverage of the programme to the entire province.
The premium for upto 51% of the population is now being paid by the Government of KP for Secondary and Tertiary Healthcare services. Per year cost of the programme is Rs. 2.96 billion including premium and administrative cost.

o   It is a Health Insurance Scheme aimed at the costs of hospitalization of the beneficiaries;
o   To identify Beneficiary households (who will be exempted from paying health insurance premium), targeting mechanism developed by Benazir Income Support Programme (Poverty Score Card) used. Households whose PMT Score is 24.51 or below, is targeted.
o   Each household consists of  8 members (Phase-I was 7 members). The head of the household, spouse and children to be enrolled for the scheme as priority, followed by dependent parents living in the same house. Additional members of the household would be covered by paying additional pro rata premiums.
o   Each registered household to be given a Health Card (Sehat Insaf Card) which make them eligible for availing benefits of the scheme.
o   The cards to be distributed in Card Distribution Centres by Community Based Organization contracted by State Life. Card Distribution Centres (CDCs) to be established in the office of Union Council, RHCs, BHUs, Dispensaries, and Government schools.
o   Inpatient healthcare services to be provided to the beneficiaries of the programme through a network of empaneled Public and private hospitals.
o   Each registered household to get coverage up to 240,000 per household (Rs. 30,000 per person) per annum for Secondary care for all the diseases treatable at district level hospitals and up to 300,000 per household for tertiary care. Tertiary care diseases include:
1.     Emergency and Trauma including all types of Fractures, Head and spinal injuries
2.     Heart and Vascular diseases
3.     Complications of Diabetes Mellitus requiring hospitalization
4.     All type of cancers
5.     HCV & HBV Complications
6.     Organ failure management including Kidney Transplant
o   Additional Benefits include:
1.     Wage Replacement – Rs. 250 per day for a maximum of three days to be paid upon discharge (Purpose is that as the insurance covers the poorest, a wage earner may not leave his treatment in the middle, worried he is losing daily wages)
2.     Tertiary care Transportation – Rs. 2,000 to be paid upon discharge
3.     Maternity Transportation – Rs. 1,000 to be paid upon discharge in case of normal or surgical delivery (IN my opinion it is essential as in most rural areas one reason of avoidance of a female coming to govt facility is transportation costing money the [excuse me for being direct] family may not be willing to afford – with recourse to local TBA
4.     OPD Voucher – One OPD voucher will be provided to each beneficiary upon discharge that may be utilized for one post discharge follow up visit
5.     Burial Insurance – 10,000 in case of a death of a beneficiary during admission 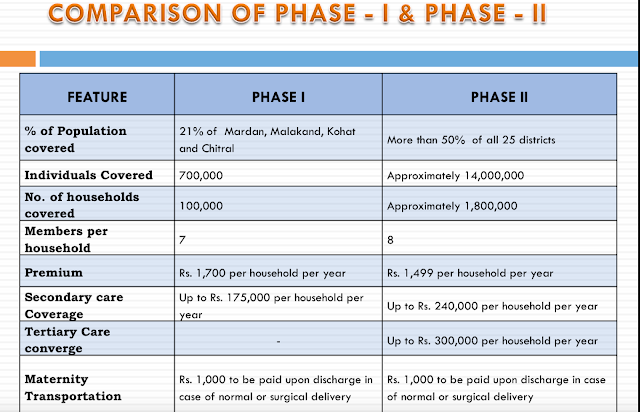 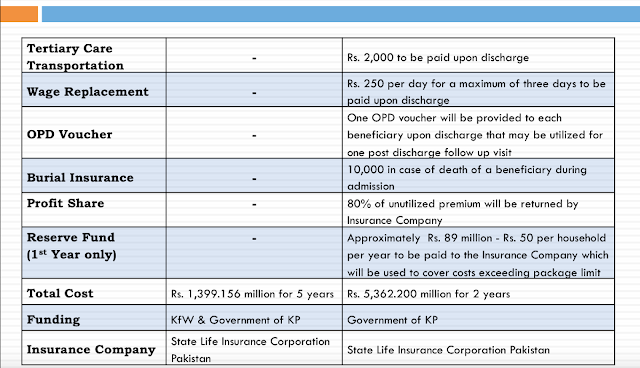 Similarly, transportation charges, wage replacement, free OPD vouchers come in. There is a reserve fund of Rs 89 M for someone crossing upper limit of 300,000 on tertiary care. Funding is exclusively KP Govt and two and a half billion per year. Insurance Company is SLIC after an open competition participated by 8 insurance companies.

For a distribution of cards which started January 2017 thereabout, or atleast gained momentum thereabout, based on atleast 5 years old data, to touch 82 % registration is singular achievement of the program and efforts of Govt, State life Corp and more importantly the Implementing Partners strategy. It succeeded where other similar programs failed. 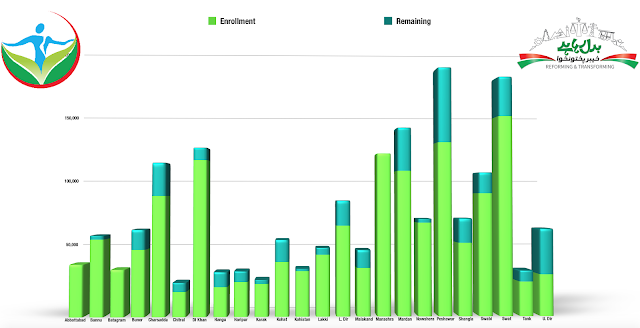 Equally encouraging is the fact that in most of the Districts distribution figures have hit either 100 % or high nineties. Hazara Division had nearly all its beneficiaries traced and covered except for Haripur. Southern districts also fared well. DI Khan and Bannu hit 90 % plus whereas Karak and Lakki Marwat are at the cusp of 90 %. 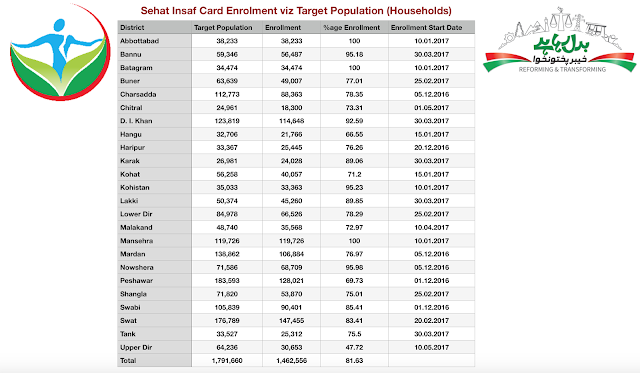 Peshawar valley distribution did great but that was as expected except for Peshawar where migration towards down country, mostly economic and movement in the sprawling shanty towns circling it, is extraordinary. Swat, Dir Upper and Dir Lower started late, with permissions from other stakeholders required. Upper Dir is yet to pick up pace. 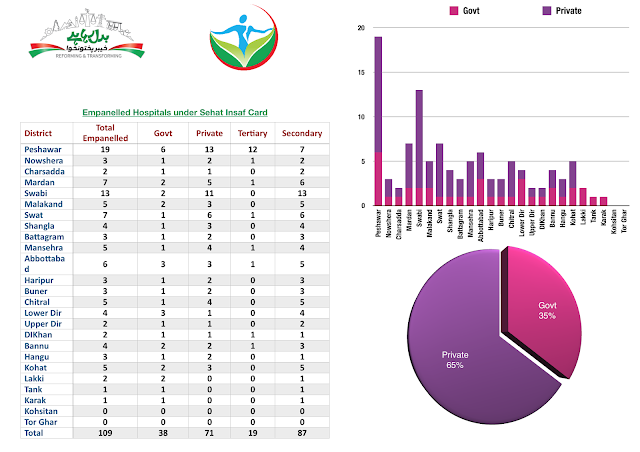 The ratio of empanelled Hospitals is 65 % in favour of private hospitals. There are multi reasons for this, primary being the rules and procedures to be followed in public sector, some initial inertia due to lack of understanding, specialised cardiac care private hospitals and their eagerness to embrace this program more than the public sector ones primarily due to loss of ‘clientele’ from Afghanistan. Still the ratio of government hospitals has increased from the 15 % it was in April. 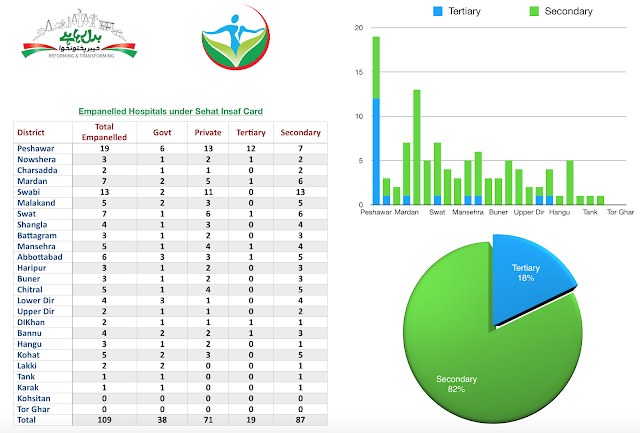 The ratio of secondary care viz tertiary care is obviously heavily tipped towards secondary care at 82 %. However whats a matter of serious concern is the lack of even a single empanelled facility in Kohistan and Torghar Districts, arguably the most peripheral along with Chitral. We do understand we have to increase this number as much as possible per district. 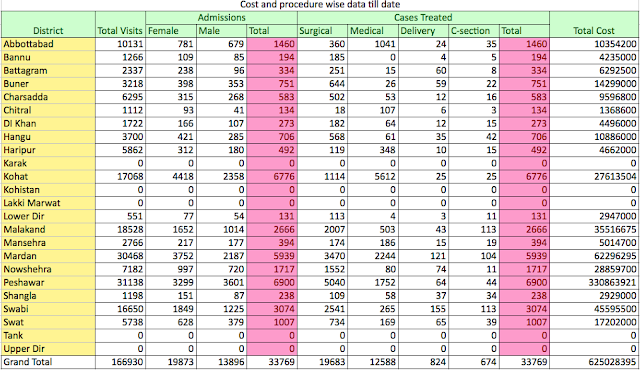 The data on costs & procedures, District wise, procedure wise, beneficiary wise, gender-wise and so many other variables are available for general public to scrutiny on sehatsahulat.com.pk

it is also a great opportunity for researchers to bring out lots of data for guidance to this initiative or examples for subsequent social health protection programs. 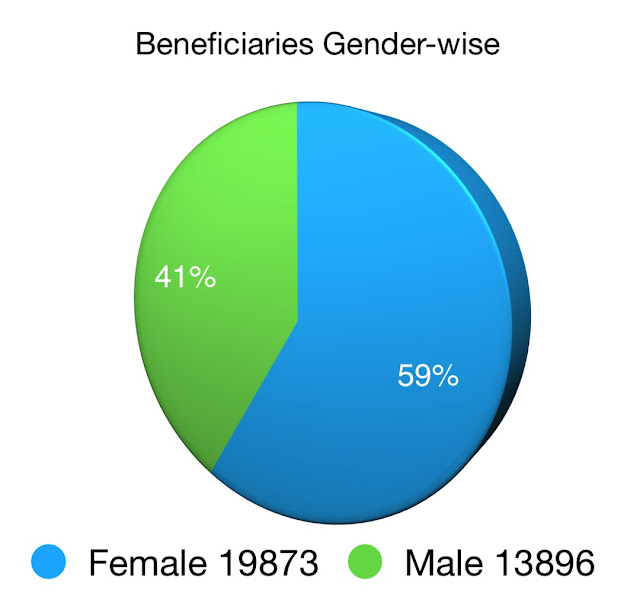 Based on the above data it is quite pleasing that the ratio of beneficiaries is tilted considerably towards female population. One reason could be (and its my personal opinion) that free treatment opportunity has incentivised families bringing forth even cold cases of females, who would otherwise not have access to healthcare due to preferential treatment being given to Male members. Whatever the reason, this is a heartening fact. We are thinking of including breast cancer, its diagnosis and treatment, including surgical procedure, costs in the insurance list. 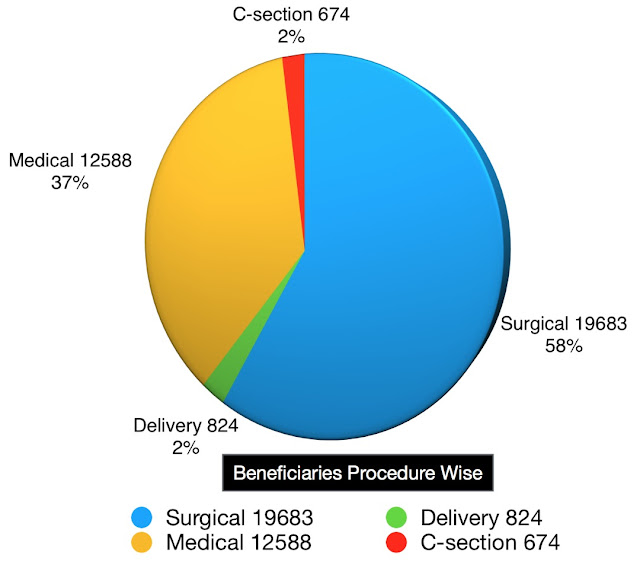 Data on procedures shows Surgeries to be around 60 %. A small study needs to be further done to bring out bifurcation (which is available otherwise) of the procedures and also assess need of such procedures. I comprehend (again my personal opinion) that people, mostly elderly, were waiting at home for a succour to take care of their health issues running for quite a number of years, and seized this opportunity to get it all done. What impact it had on saving out of pocket expenditure of these poor families is again something to be subject of a study. 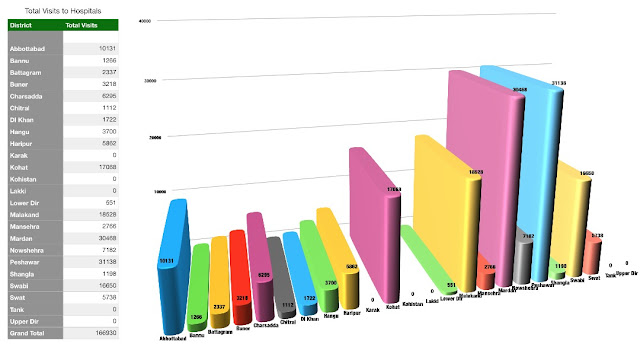 The District wise data on treatment cost and opportunities of treatment availed give Peshawar the edge. While visits to Hospitals hitting the roof compared to others is understandable, treatment costs of Peshawar overlapping others comfortably has to be judged with Mardan also being nearly there. These were the Districts which were in the initial phases of distribution. 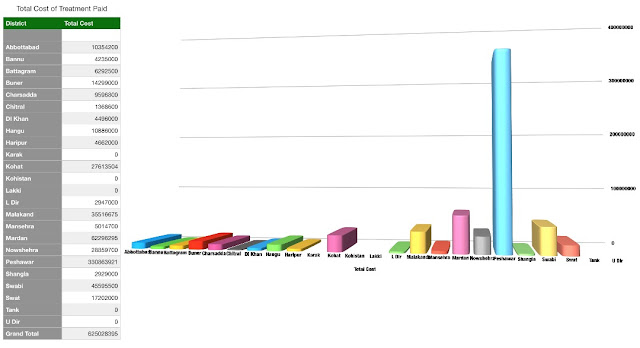 However, what the Department needs to do is emphasise a communication strategy in peripheral districts, especially those with major swaths of rural areas such as DI Khan, Bannu, hilly Districts and those with lesser literacy ratio to ensure beneficiaries out there know how to use the card, where to use it, the diseases it covers and the empaneled hospitals on the dot.

Physical Progress
Financial Progress (Rs. Million)
As of today, the Department has undertaken the following futuristic measures, the implementation or otherwise of which is the total discretion of the Political Government:
(i) An actuary analysis has been carried out for a health insurance scheme for civil servants covering EVERY treatment for them and dependents in ANY hospital in Pakistan. They will carry a Card with a chip identifying them and their dependents but no cash, walk in, get treated and come out. Its assessment is Rs 900 per month (approx) and the Chief Minister is to chair a final meeting to decide either way;
(ii) A proposal has also been submitted to make health insurance a product. It was thought of when various Departments approached us for insurance cover of different categories of people; Social Welfare wanted coverage for transgenders, Information for Journalists, Advocate General office for lawyers, Culture Department for artists etc. Whereas Health Department cannot include them in the existing social health protection scheme designed on poverty index, it can always process their inclusion as a product buyer, where it is not our concern from where the premium payment comes as long as its not from the sehat sahulat scheme. It can be the concerned government Departments or the group of people themselves.
(iii) A draft Bill has been sent to Law Department for vetting to give legal cover to social health protection. Law Department has raised certain questions on the permanence or otherwise of funding source (ADP) and my point (v) below will explain a plausible solution.
(iv) The Chief Minister during his directions in various ADP meetings has asked for raising the bar of PMT to cover the universally defined poor i.e. with income below US$ 2 per day. That raises the PMT to 32.5 from the existing 24 and increases the % age coverage of population from 51 to 69 % adding around 0.6 M more households to the existing target beneficiaries Household of 1.8 M. A further financing of around Rs 1 Billion will be needed for that.
(v) Lastly, we have argued before the Chief Minister too that this initiative should NOT be paid from the development budget to give it that permanent financial position. This was nodded to during those meetings, and Department will move a summary after Eid for a decision on this, and will not mind equal amount subtracted from its ADP share towards the regular side of budget for this purpose.
website >> http://sehatsahulat.com.pk
Ends
aa
1 Comment