A comparative assessment of creation of Districts reveals that most of them were carved out of then-existing Districts, however, the purpose and criteria is not known in black and white. Therefore, the following assessment based on below fundamentals:

NOTE: Purpose is to raise honest questions, not to give proposals.

Graph 2 is Districts viz Area in square kilometers. Our of the districts being assessed, only Lakki is in area larger than the now-remaining District it was carved out. All others including Haripur from Abbottabad, Batagram from Mansehra, Tank from DI Khan, Hangu from Kohat, Buner and Shangla from Swat and Charsadda from Peshawar are still less in area from the ‘remaining parent District’ they left behind.

Graph 3 is Districts viz Population. All Districts being assessed have lesser population from their parent Districts, Haripur from Abbottabad, Batagram from Mansehra, Lakki from Bannu, Tank from DI Khan, Hangu from Kohat, Buner and Shangla from Swat, Charsadda from Peshawar.

Graph 4 indicates comparison of lag in infrastructure as part of the indicator for Provincial Finance Commission award. except for Hangu and Batagram, all other districts still show distinct lag in infrastructure from the parent District. Haripur from Abbottabad, Lakki from Bannu, Tank from DI Khan, Hangu from Kohat, Buner and Shangla from Swat and Charsadda from Peshawar. It can be presumed that their lag may have reduced, but if the purpose of their creation was investment in betterment, while 20 plus years have gone, the investment and purpose has actually not worked.

Graph 5 is the poverty score of Districts. It shows that the assessed Districts’ population is poorer that the Districts they bifurcated from. Haripur from Abbottabad, Batagram from Mansehra, Lakki from Bannu, Hangu from Kohat, Buner and Shangla from Swat and Charsadda from Peshawar. Again if the purpose was bifurcation of Tehsils from existing Districts and their elevation to distinct and separate District, arguably poverty alleviation is not a result which came out of it.

In Human Resource Index too given in first table above, Abbottabad is at 13th in Pakistan while Haripur is 18th, Mansehra is 34th while Batagram is 70th. Bannu is at serial 55 while Lakki Marwat trails it at 59. DI Khan is 71st while Tank 76th, Kohat is 45th while Hangu is 57th, Swat is at 52 while Buner and Shangla are at 66 & 82 respectively. Similarly Peshawar is at 14th while Charsadda trails at distant 36th.

Two types of financial implications arise out of creation of a new District, the one-time and recurrent. Creation of posts is a recurrent and permanent liability. Following table shows that 3301 posts need to be created to actualize a District with an annual recurring cost of Rs 1733 Million. P&D Department has estimated the one time cost of “Government buildings” required alone as around Rs 4 Billion.

The selected Districts’ data reveals that they are still poorer in status in HDI, Lag in Infrastructure as well as poverty from the Districts they were carved out of or to put it in other words, the Tehsils upgraded to Districts with purpose of improving the status of their inhabitants were not able to do so.

One of the perceived reasons could be that while they lacked required funds and financial inputs – but arguably when those inputs came, the around 4 Billion plus one time and the 1 Billion plus recurring cost of their ‘status’ of District, when allocated out of their share, actually regressed their ability to spend on poverty alleviation, HDI improvement and infrastructure. They may have gotten government buildings as infrastructure but the roads, dams etc, the infrastructure of public good, may not have gotten enough funds for any worthwhile improvement.

If intent was to provide access to administrative offices, it probably would have been worthwhile to delegate authority to officers in the Tehsil instead of declaring such areas as Districts. Travelling for Domicile being made could have been reduced by bestowing the Assistant Commissioner the powers of the Deputy Commissioner. Similarly SDOs could be delegated powers of XENs & so on, if the purpose was to provide access nearer to their homes for the inhabitants, instead of creating a ful-fledged District.

A rethink of policy and criteria is probably justified for future creation of Districts as the expenditure of creation itself probably is the most pertinent blocker of its subsequent development and improvement in status. Furthermore, if within Districts, Tehsils are classified as under-developed, poorer etc, possibility of taking down the Provincial Finance Commission award to Tehsils can be also considered. After all Tehsils are integral part of the Local Governance system.

[FINAL WORD .. AS MORE DATA IS RECEIVED, THIS WRITE UP WILL BE UPDATED AND IMPROVED]

Information for reference purposes includes the Provincial Finance Commission award formula for distribution of resources among Districts. This formula is 60% weightage for population, 20% for backwardness and 20% for lag in infrastructure. Total weightage calculated gives out the share of money. The previous and latest formula on share distribution is given below. 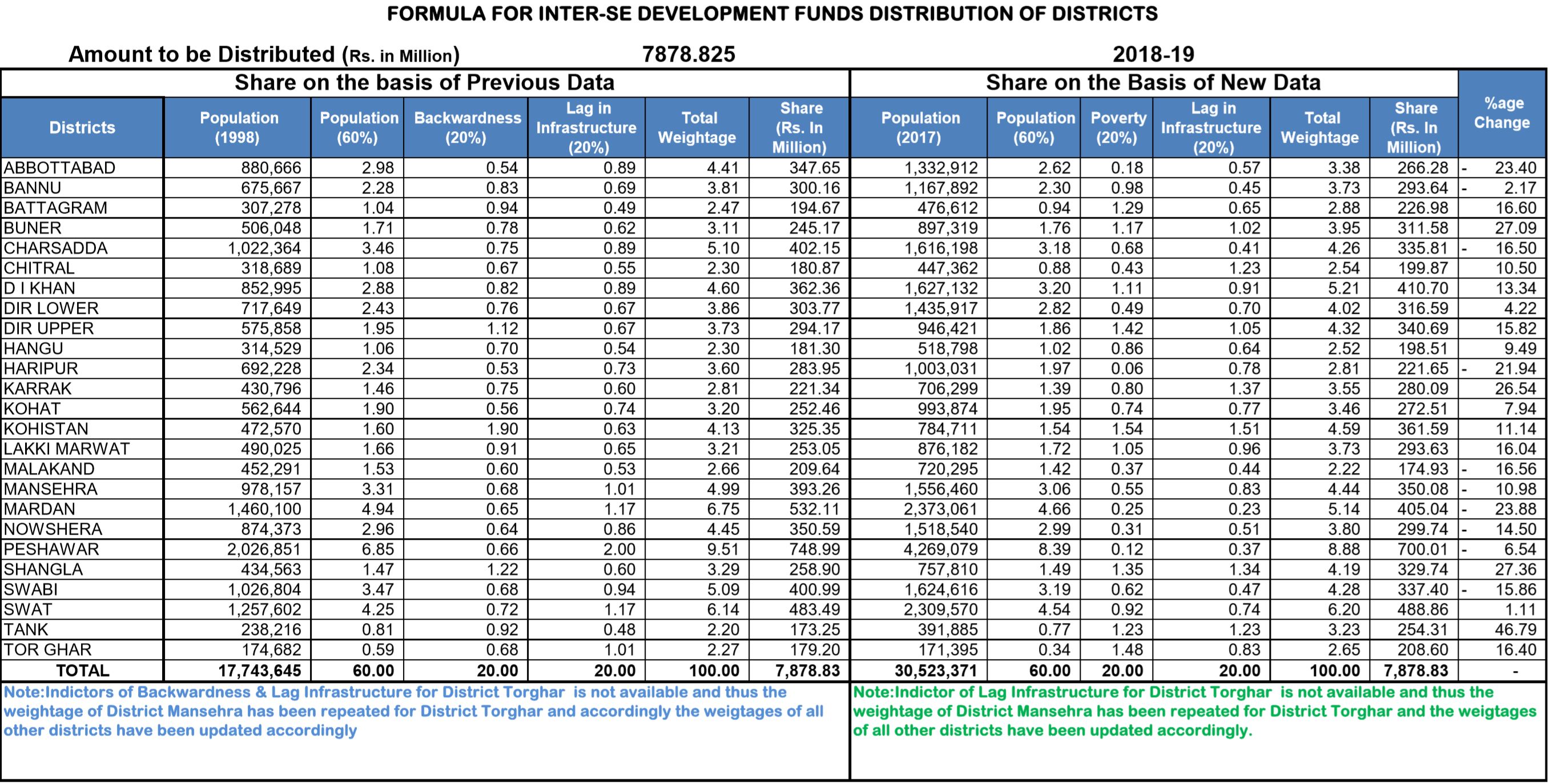 DISTRICT WISE HOUSEHOLDS TO BE COVERED ON 32.49 PMT SCORE

[4] Based on calculations of “lag in Infrastructure” data from Provincial Finance Commission Award for Districts projected for Financial Year 2017-18. Tor Ghar data not available, so Mansehra weightage taken for it too.

[5] Households with $2 or less income, as per the poverty alleviation survey. Newer created districts are not bifurcated so are part of the old one. Mansehra includes Torghar.

[8] Government of Khyber Pakhtunkhwa Board of Revenue Notification No. Rev:VI/Creation of New Distt/Kolai Palas/Kohistan/16361 dated 10 Aug, 2017

[10] Government of Khyber Pakhtunkhwa Board of Revenue Notification No Rev:VI/Tor Ghar 2937 dated 15 Feb 2011 issued pursuant to SRO[1]/2011 dated 10 Feb. 2011 issued under signature of President of Pakistan ceasing its status as Tribal area