(Pl Note: This paper basically is based on presentation made at Senior Management Wing of NMC Lahore and Islamabad)
The paper will cover the topic in following sequence:

2. Comparisons: In order to give a perspective the comparisons based on socio-economic indicators, history, system of governance etc include: (a) Districts of Provincially Administered Tribal Areas (PATA) with each other (b) PATA with Khyber Pakhtunkhwa (KP) as a whole (c) Hazara Division with KP (d) Central KP with the province (e) Southern KP with the Province (f) KP and Federally Administered Tribal Areas (FATA) 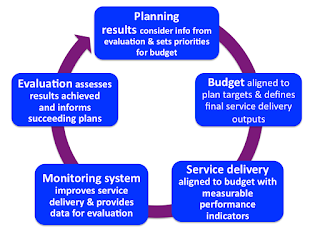 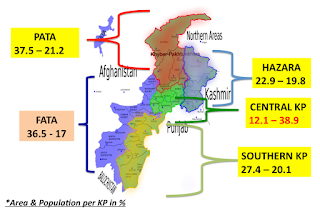 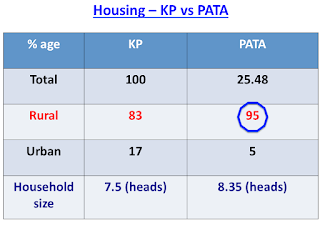 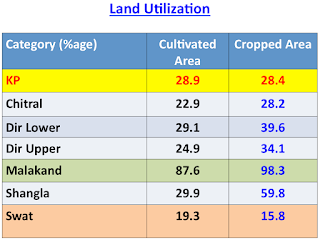 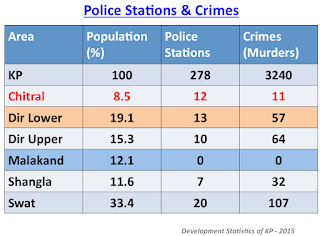 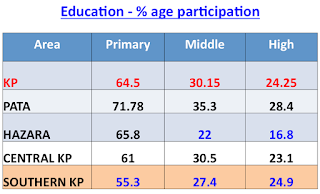 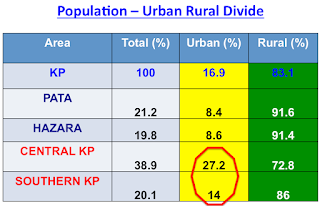 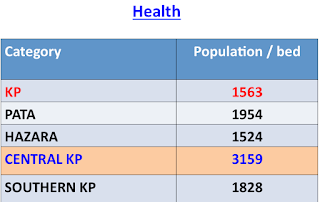 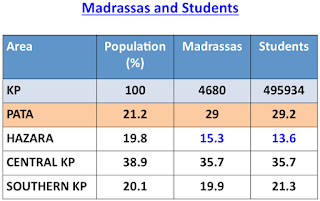 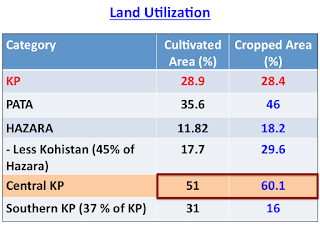 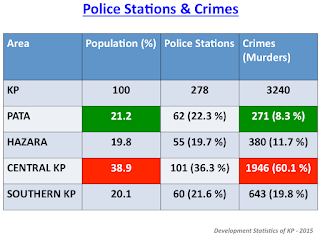 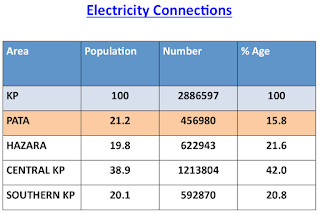 These indicators clearly show marked socio-economic diversity between these areas. This will be more evident from the following graphical comparison of which area tops in which indicator: 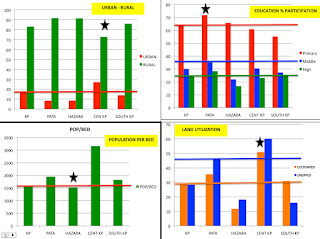 1.  Work / Employment: Major employment venues for KP are Agriculture (50 %), Whole-Sale / Retail businesses (21 %), Construction (17 %) and Manufacturing (12 %).
2. Displacement – Urban Migration: According to UNFPA Report 2013, 63 % of migrants in Pakistan during the last decade have moved to an urban area. Out of these 56 % have moved to a Provincial Capital or the federal capital. The reasons for such a trend in migration are first economic followed by absence of infrastructure in rural areas and extremely poor social services. In KP this migration and the displaced population has effected all divisional headquarters.
Amongst its negative impacts that it has created sectarian imbalances in DI Khan, Hangu & Kohat primarily. All these areas fall in Southern KP where the sizeable Shia population has been, and is still being, rendered into a minority.
The displaced families of FATA, most of whom are going back and then coming out due to renewed operations or even economic opportunities, number around 160,000. Such huge population with its own cultural practices and religious orientation has in most periphery areas of big cities overwhelmed the local population.
3. Case Study on Peshawar: (sesapzai.wordpress.com) – The case study concludes that most economic migrants do not bring families with them therefore while on one hand their stakes are not tied to the city on the other their mere presence effects the socio-cultural fabric. Most of these youth are transporters or daily wage workers, social interaction of the local population infuses new ideas, attitudes, behaviours and life-styles both ways, provide opportunity for economic and social mobility to these migrants too.
As a positive, due to this migration the women of those areas who were living in abject social control do achieve some freedom and therefore move to Peshawar does provide new opportunities for pakhtun women.
The move towards urban city has also brought changes in family structure, shift from extended to nuclear families, weakening of traditional family obligations and rituals and trend towards less children,
On the economic side 30 to 38 % of the money earned by them is sent back home while they contribute to unplanned urbanisation when they live in informal settlements which require adhoc development.
4. Cantonments – socio-cultural oasis: Area comprising KP has always been a rich cache for cantonments. Starting from Abbottabad which has the Pakistan Military Academy, Infantry (Baluch, FF) Regimental Centres amongst others, down to Mardan with the Punjab Regimental Centre, Nowshera with Artillery and Armoured Corps Centres, Garrisons at Kohat, Bannu and DI Khan the Army’s presence here has always been so. Similarly Airforce has its own Academy in KP. With the operations against extremists Army is now extended to forts of FATA too. So wherever the Army settles a particular environment comes up.
There is a significant concentration of people from Punjab, Urdu Speakers and Christian minority in Cantonment bringing along their socio-cultural backgrounds and practices.
Due to families of army officers, civil bureaucracy and education elite settled in cantonments the area has a relatively modern outlook, culture, business practices, fashion and entertainment opportunities.
Local economy including the suppliers of goods (such as vegetables, meat etc) from periphery areas also improves – standard of goods increases the profit margin.
5. Impact of Afghan Refugees: (unhcr.org) Contrary to popular beliefs, refugees actually started trickling into Pakistan from Afghanistan right from 1973 when Kind Zahir Shah was dethroned. These Afghans brought with them their own set of family values, pattern of social interaction, gender behaviour, way and means of living and the population and socio-cultural demography of the locals was profoundly impacted upon.
Unfortunately, but due to their presence, bomb blasts became a regular feature and murder, robbery, narcotics, kidnapping for ransom cases increased. Prostitution which before them was not noticeable, increased many fold. The Afghans brought with themselves 27 jihadist organisations initially among 4 million refugees in KP alone.
on the socio-economic front they remained exempted from our taxes and other liabilities so never contributed to documented economy, they consumed urban facilities such as sewerage, power, fuel, roads, health and education. They rented houses where due to poverty more than the possible number of people lived over-crowing whole localities and civic facilities. An estimated one third of these refugees lived in urban areas, the rest in rural with very minor number in camps.

6. Socio-cultural institutions: (Taliban Militancy: Replacing a Culture of Peace, Shaheen Buneri) –  With quite a few centuries of rich culture the Pakhtun heartland reverberated with traditions of jirga, hujra (which actually started with musical nights), mela to name a few. Artists included folk artists, folk musical instruments such as rabab, mangay, shpelay – rich dance traditions such as atanr performed on dhol. Pashto tapa was the core of Pashto folklore and it was mostly put together by women. Dance and Music Schools were there till late 90s in Swat, Bannu and Peshawar.
However, during the 80s, and parallel to these activities seminaries were replacing festivals slowly but surely and took full control during the rise of taliban in Swat and FATA in mid-2000s.
Since 2001 (Reported cases) 18 people including 12 women directly linked to music have been killed, over 20 cases of harassment have been registered, 5 have quit music due to forced religiosity, 6 incidents of kidnapping of musicians and artists have happened, 600 people lost their livelihood due to closure of Dabgari Bazar Peshawar and 200 due to Banr Bazar Swat. Over 50 Sufi shrines have been attacked including the symbol of Pashto sufi poetry and gallantry, Rehman Baba. Many musicians have left for Dubai as forced exile.

7. FATA:   Contrary to popular belief Frontier Crimes Regulation 1901 (FCR) is not exclusive to FATA. It also stood extended to Gilgit Baltistan, Malakand Division and Baluchistan. However, as of now it is applicable only in FATA.
The socio-economic indicators of FATA are abysmally low compared to KP. In Education out of a 100 boys and girls who enter school only 2.9 % in boys and 0.66 % in girls pass the 10th grade.
If one is to fund construction of schools for all the primary-age (4-9 years) children in FATA, with the present financial allocation portfolio it will take 185 years (yes 185) and if one is to remove deficiency of basic facilities in existing schools alone, with the present yearly allocation of funds it will take 58.5 years.
Less than 9 % of the total geographic area is cultivated, population per bed is 2179 against 1594 of KP and urban population is 2.68 % versus 17 % of KP.
FATA has always shown general tendency to resist change with questions being now raised as to whether maliks are actually the true representatives of the people. A study has shown that 58 % of the people of FATA prefer still to live within their community and tribal culture. Migration out of area is due to economic reasons and is of youth of 18 till 29 years of age and the most favoured city for settlement is Peshawar. However due to peculiar socio-cultural backgrounds level of impact on adjacent areas is severe. According to post crisis needs assessment report of Sep 2010 24.4 % of the employed work force is employed outside country, 29.5 % in another province and 10.3 % in another district or agency – this in itself is a reflection on the economic opportunities within FATA.

8. Impact of Militancy:  Militancy found enabling circumstances in KP & FATA. The area was being openly used as backyard for the great game. The US-funded and our-designed Afghan jehad laid the foundation for similar activities elsewhere too.
Another enabling factor was failure of system of governance. People abhorred delayed justice, corruption and lack of transparency, huge gaps in essential social services and rule of law, and access to justice. Their narration of change was ably exploited by the extremists.
Another failure of state was that during every crisis its response was belated and bloated. Its functionaries were more concerned of disaster tourism. Here the extremist organisations reached out for humanitarian relief much more swiftly and meaningfully be it earthquake of 2005 or floods of 2010 and so succeeded in forwarding their religious and ideological objectives during crisis.
In view of all the above the extremists used a combination of force, economic incentives and faith-based indoctrination to change the socio-cultural narrative towards a religious narrative.
Militants fortunately did not try to provide alternative models of service delivery or may have succeeded more. However they did provide parallel systems of justice and economic incentives to woo the unemployed and disenfranchised. Resultantly the affluent moved to Peshawar and Abbottabad from Swat, FATA and other areas, which impacted the culture hugely and in some places irreversibly. Civi sense and responsibility patters have been altered.

1. The extreme Rural-Urban divide has led to thin spread of resources to cover all gaps and huge throw forwards due to enhanced number of schemes in development portfolio in anxiety to reach everyone.

2. Extreme diversity in adjacent areas even means there is no single recipe and we need customised solutions within each area and even within sub-areas – one formula for all simply would not work

3. The constant demographic changes due to nearly constant movement of sizeable population makes it a guessing game for the managers to plan for service delivery, environment protection etc in short, medium and long term.

4. With concentration of population in cities and more migrants coming, those left back in rural communities demand city like facilities. This demand is accentuated when their migrant kin go back to areas of origin and tell tales of city or even send back money indicating enhanced economic opportunities.

5. Urban areas are now literally un-managable due to diversity of religious practices perception and culture. Importation of (arguably) hardliner culture and religious orientation has given rise to following on one hand but tensions on the other where moderates are fighting a losing battle.

6. Specialist cadres within cadres in civil service have come up with groups of officers getting exclusive postings to particular areas. Their experience of previous postings at junior level are thought to make them experts in affairs of those areas – which is wrong on two counts. Firstly affiliation also has its own issues, and secondly; but better people who couldn’t get a chance at lower level are not given the opportunity to serve and also improve their capacity for such assignments.

7. Religious intolerance limits the scope of meaningful interventions and sectarian intolerance has been aggravated.

8. While the previous and present government both emphasised efforts to revive culture, with so much damage there is a question of whether it is too little too late ?!

9. More responsible and responsive public sector including civil service is being set in place especially at the Chief Secretary KP’s office, the Right to Service Commission and Right to Information law. One question remains – being Commissions and Cells would there be sustainability of this effort as a systemic, entrenched structure ?!!      Ends.